Varanasi is a unique amalgamation of faiths, religions, cultures and experiences that few places in the world can rival. There are hundreds of sacred places here that are marked with mystical experiences and lore’s of sages, gurus and seers. Explore the temple city of gorgeous Varanasi and immerse yourself in the stories of Ayodhya. The morning boat ride will take you the another level of healing your Soul with lots of Possitive Energy.

Duration of the tour: 2 hours
Price for per person: INR 1000
Note: Guide fees, all entrance fees, boat and hotel pickup services are included 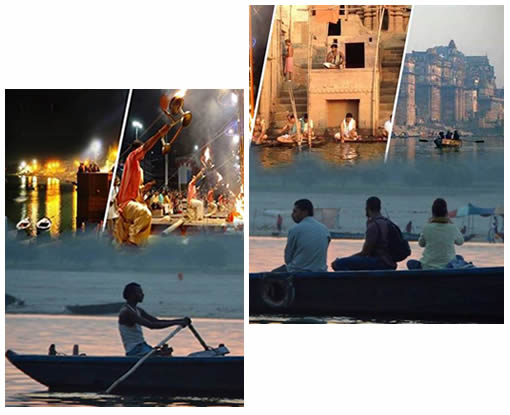 TOUR 2: The Sacred and the Profane (Northern Walk)

The ancient city of Varanasi is not only the cultural capital of India but occupies a significant place when it comes to commerce. It has many hotspots for local shopping. During the tour we do not only take part in the daily rituals but also testify how everyday life and religious life goes on together. This tour starts in early morning. It includes the morning boat ride from Assi ghat up to one of last ghat of Kashi. Moreover it includes a typical benarasi breakfast along with Chai from a famous chai shop. If you are interested to join the sightseeing without the boat ride, we can also arrange different timings according to your convenience.

Duration of the tour - 3 to 4 hours
Price per person - INR 1600
Note: Including hotel pickup, all entrance fees and 1 boat trip services 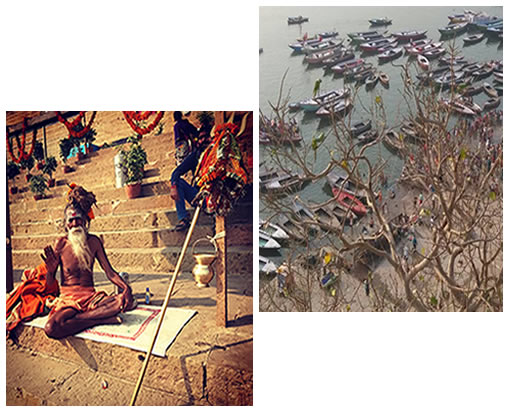 The southern part of Varanasi has such amazing holly places which will make you feels like spiritual bathing . It is also known for its famous Ghats where ten-horse were sacrificed. You will find here most of the oldest temples as well as classical Music, Yoga, euphoric Temple atmosphere, traditional wrestling and Pilgrimage sites.

Duration of the tour - 3 to 4 hours
Price per person - INR 1600
For 2 person: INR 4000 and per additional
Note: Including hotel pickup, all entrance fees and 1 boat trip services 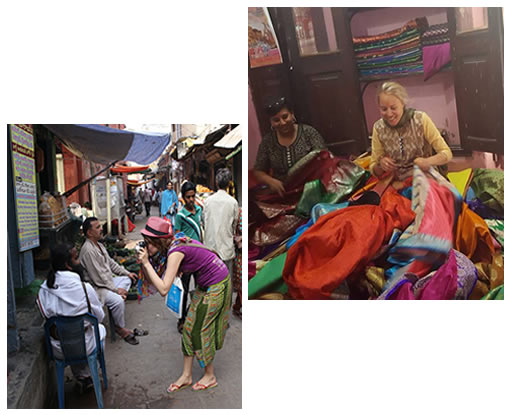 From being at its commanding position on the River Ganga (Ganges), the City of Varanasi has witnessed the entire history of Indian Civilization as it evolved in North India. Here, the great sages have propounded their philosophies; great reformers have come here to see the human life in various new different forms. Yogis and Ascetics have made their retreats and hermitages here. All the Hindu Gods have emerged from the shadows into Bold Relief, as people have come to understand them, have seen their faces and have created their multi form images. Varanasi presents a unique combination of physical, metaphysical and supernatural elements. According to the Hindu mythology, Varanasi liberates soul from human body to the ultimate. It is the Ganga Ghats of Varanasi that complement the concept of divinity. The river Ganges is the most holy river in Hinduism and is worshiped globally by Hindus where ever they reside. The Ganga Ghats at Varanasi are full of pilgrims who flock to the place to take a dip in the holy Ganges, which is believed to absolve one from all sins. A multitude of Hindu deities is visible everywhere in Varanasi. In temples, one can see Shiva-Ling, Deity of 4 armed Lord Vishnu or the silver mask of Goddess Durga. When Hindus travel to places like Varanasi, it's not just for sightseeing or sacred place touring, but it is for sacred pilgrimage, for darshana which means viewing and praying while standing in front. It is for the darshana of that sacred deity who presides, that Hindus from all over the country and even all over the world come here. No wonder Varanasi is religiously oldest city for Hindus. And not just Hindus, Varanasi has proved out to be a major sacred pilgrimage destination for Buddhists, Jains also and to some extent for Muslims as well. For over 500 past years, Varanasi has bewildered, astonished and surprised visitors from the west. And it continues to so do time and again up till now also. Today Varanasi has visitors, travelers, devotees coming from not just other parts of India but world over. They come here to learn Hinduism, to learn spirituality, to understand the meaning of life and death, to understand the process of how to be a better human being, how to be in touch with the divine almighty. The Ganges river, The ghats, The people, The pundits, The culture of the city's lanes and small alleys etc are all like a magnet which attracts tourists mostly coming from big cities and metros where such simplicity, such truthfulness and such purerity does not exists. Here, we would like our website visitors to go through a sample Varanasi tour outline or a simple itinerary which we have designed for our probable clients to go through in order to get an overview of Varanasi's tour guidance.

Duration of the tour: 3.5 to 4.5 hours
Price per person: INR 2400
For 2 person: INR 4000 and per additional
persons: INR 1100
Note: all entrance fees, hotel pickup services,transportation charges and 1 drink are included


For further query please visite our contact us page 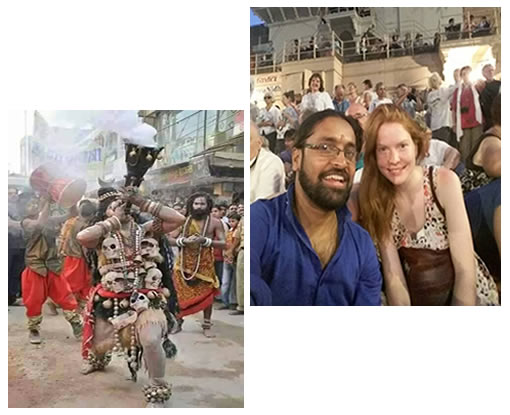 Price per person: INR 3000
For 2 person: INR 5500 and per additional
person: INR 1500 (up to 4 persons)
Note: all entrance fees,transportation charges and hotel pickup services are included 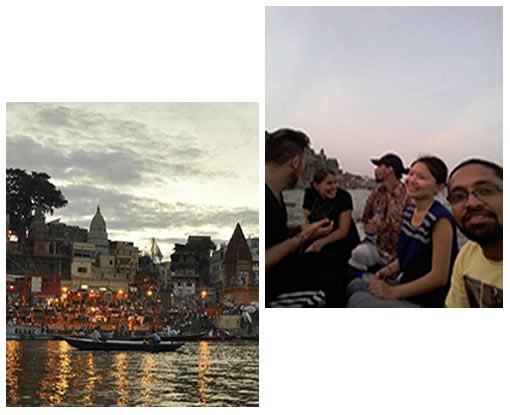 On this tour you will visit the most popular Bathing Ghats where the Ganga Aarti (evening ceremony for river Ganga) is performed daily in the evening by a group of priests at the Dashashwamedh ghat. This beautiful ritual makes every moment of the evening period special and fills with the spiritual thoughts.

Duration of the tour: 2 hours
Price for per person: INR 1000
Note: Guide fees, all entrance fees, boat and hotel pickup services are included 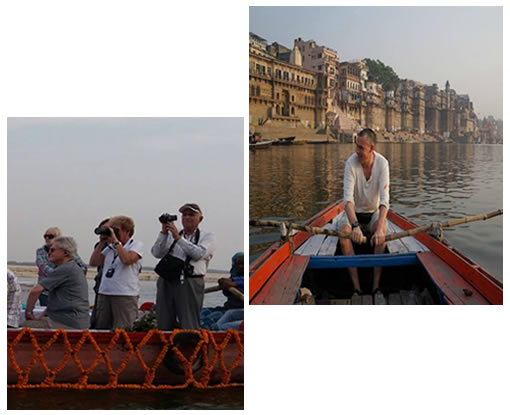 Sarnath is one of the four most important pilgrimage sites in the world, the other three Bodhgaya, Kapalivastu and Kusinagar. It is the place where Buddha gave his first sermon after his enlightment. Explore Buddhist monasteries, shrines, and stupas dating from the 3rd century BCE, as well as the shady deer park skirting the ruins. Visit the Archaeological Museum, featuring exquisite early sculptures excaved at the ruins.End up the tour visiting some of the temples built by Tibetan, Japanese, Korean, Chinese, and Sri Lankan organizations.

For further query please visite our contact us page 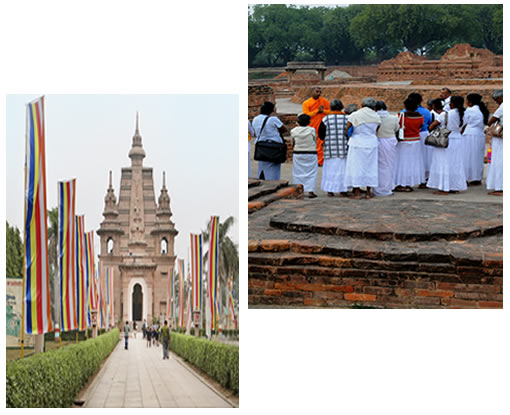 
You can also get in touch with us on Social Media